Hit enter to search or ESC to close

FROM BRUSH MAKERS
TO SWEEPER SPECIALISTS

The history of Stolzenberg's traditional business

The Stolzenberg family company can look back on over 125 years of history: In the 19th century, Hermann Stolzenberg went on his travels to a brush maker in Osnabrück after his vocational training. In the Black Forest and in the Ore Mountains, the centers of this occupational field at the time, he deepened his knowledge. Back in his hometown of Osnabrück, Hermann Stolzenberg founded his own company in 1889. The craftsman became a merchant.

In ancient tradition, the general ledger of the company was at that time under the foreword “with God”. It documented that this merchant does not seek to cheat his customers, but to operate his business honestly and conscientiously. A principle that is just as binding for the sweeper specialists of today as for the brush-makers of the past. 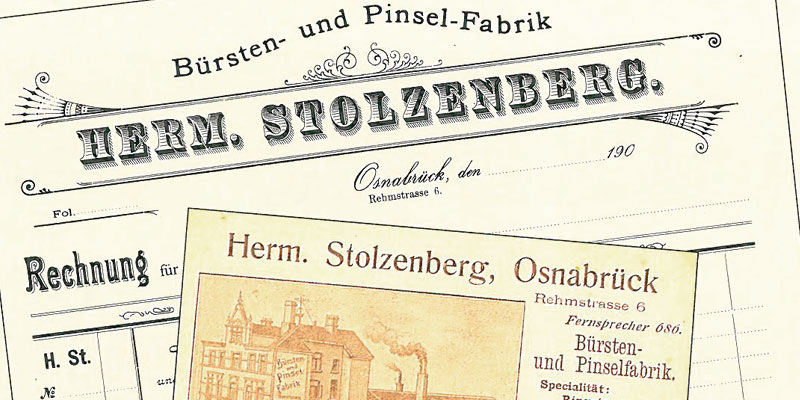 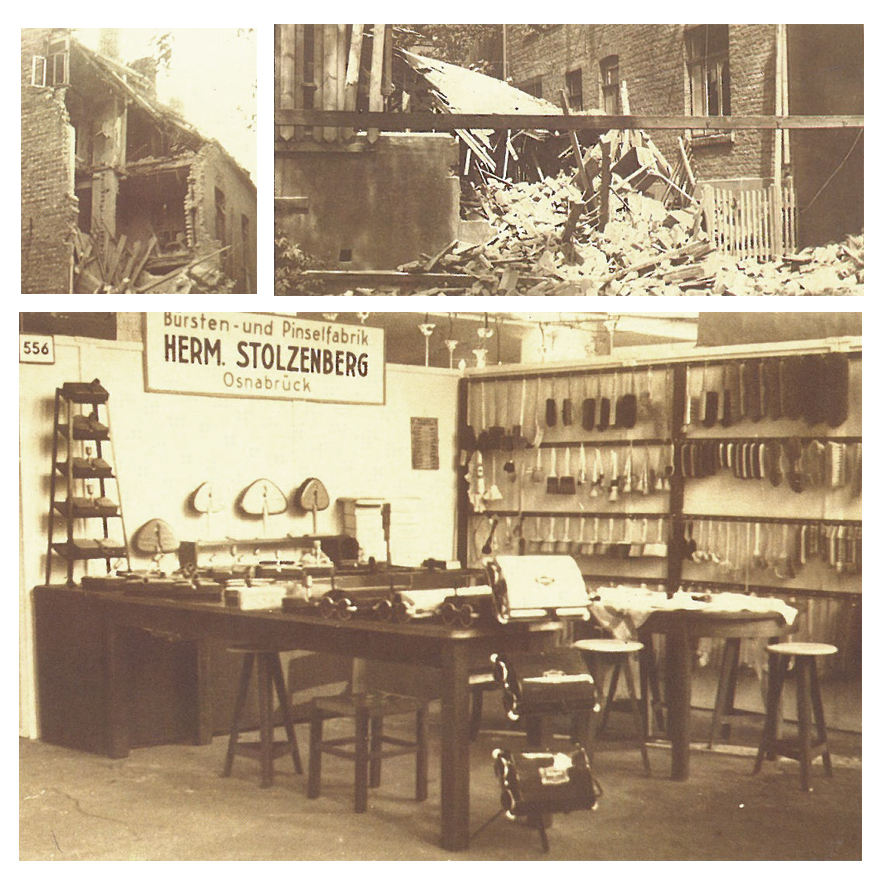 In the ten years after it was founded, the company has grown so fast that the business had to move twice within the city of Osnabrück. Over 100 years – from 1900 to 2002 – the business was located in their own properties on Rehmstraße /Heinrichstraße.

Wilhelm Stolzenberg had to lead the company through very difficult times. With bombing raids in 1944 and 1945, the business was completely destroyed together with its machinery and materials. A completely new beginning had to be made with the purchase of paper and pencil, and hammer and nails.

Yet, at the first post-war trade fair in Cologne, the Stolzenberg company were already presenting their products. In addition to the original manufacture of household brushware, the product range was supplemented in the years from 1930 to 1935 by the first forerunner of today’s road sweepers: The path towards mechanical floor cleaning equipment was consistently continued in the years around 1950. With a contemporary series of small carpet sweepers and the first floor sweeper, Stolzenberg showed itself to be adaptable and full of innovative spirit. For the first time, the sweeper specialist presented a mechanical carpet sweeper and introduced a full range of so-called polishing brushes

The spirit of the age and competition

In the third generation of the family business, Dieter Stolzenberg joined the company in 1957. He started to develop a complete series of mechanically driven carpet sweepers in order for the company to be able to establish itself in competition with international manufacturers. This product range shaped an entire decade. Throughout Europe, Stolzenberg offered carpet sweepers produced using industrial manufacturing processes as private label products for the first time in the company’s history. Exports flourished and the first private-label customers applied Stolzenberg sweepers under their own brand.

When it became clear that household vacuum cleaners were becoming more affordable and would replace the carpet sweeper in the market, the company concentrated on the carpet sweeper for large area cleaning. Thus Stolzenberg developed one of the world’s first hand-operated sweepers in the 1960s.

1978 marked an important milestone in the company’s history; the development of the tandem roller system (TRS) for industrial cleaning with a sweeper. Stolzenberg implemented this technique in a full range of hand-operated sweepers. 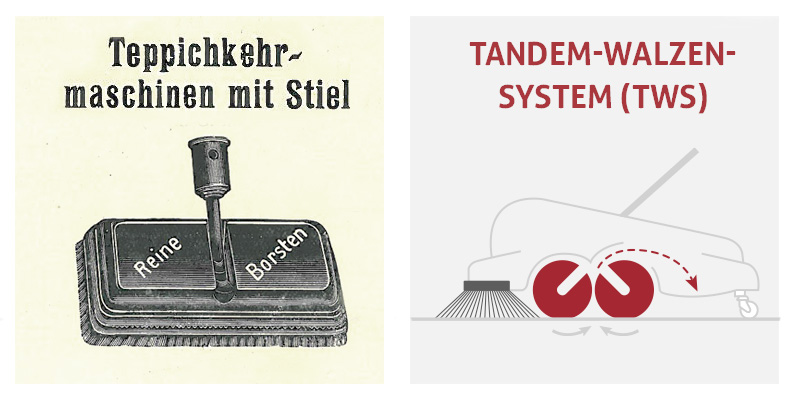 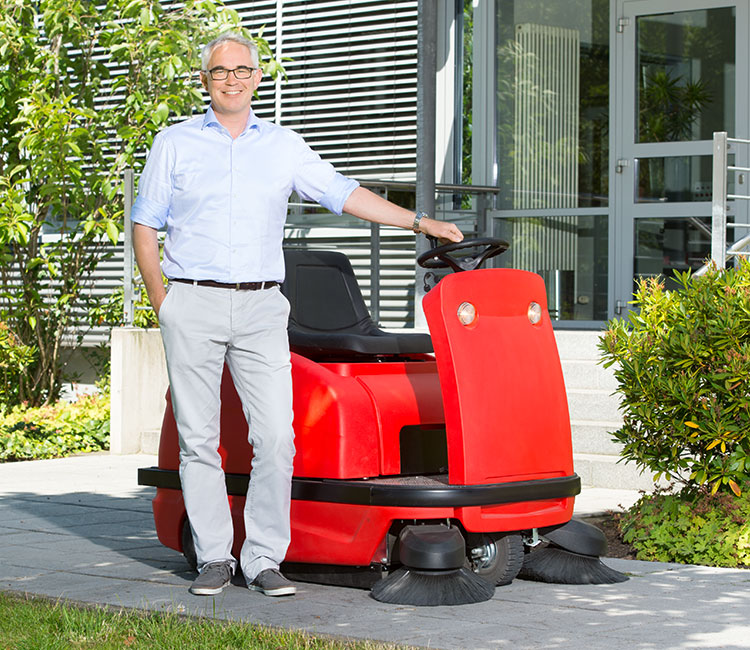 Growing requirements of efficiency and profitability of industrial cleaning, the advance of globalization and increased international competition are the challenges the 21st century, which Kai Stolzenberg stipulates as since 1996.

In the 4th generation of the family business, he realized a consistent expansion of the product range – from semi-professional hand-operated sweepers to fully hydraulically driven seat-operated sweepers with high dumping. Sales strategies were adapted and continued to promote internationalization. Stolzenberg sweepers are now also used from Australia to the USA and from Iceland to South Africa. The company places great value on keeping its expertise on development in-house – from specification to assembly of the units.

The close cooperation with suppliers worldwide, a team of motivated employees and highly efficient logistics of manufacture enable flexibility with which Stolzenberg has prevailed in the market. Stolzenberg is also flexible in the processing of customer requests. Thus we configure machines specifically to the requirements of our customers within the shortest time. An export quota of around 80% proves the international orientation.

Today, Stolzenberg is a leading supplier and developer of technically superior sweepers and innovative solutions.

Thus, with our employees, we are optimistic about a bright future for an even cleaner world – from Stolzenberg cleaning devices.

From the manual sweeper to
the ride-on sweeper:
The sweeper specialist has the right sweeper for every situation.